Do species differences in dance prove crane displays are innate?         We think the question is inappropriate and based on a false dichotomy. 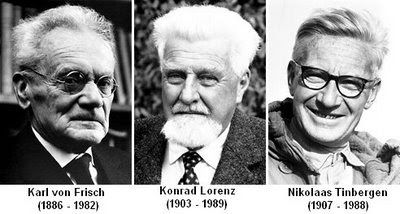 Animal behavior was validated as "real science" when the 1973 Nobel prize in Physiology went to Karl von Frisch, Konrad Lorenz, and Nikolaas Tinbergen.

At the time of that 1973 prize, neurophysiology was limited to electrophysiology of individual nerve cells and included little more than hand-waving at the psychological realm that emphasized learning, emotion and mental processes.

The research of these 1973 Nobelists was solidly grounded in precise observation of a defined set of behaviors, with a perspective that dodged between the sentimentality of anthromorphism and the formal dogmas of behaviorist psychology rampant in their day. The scientific rigor of these ethologists first bought a measure of scientific respect to biological study of behavior. To encourage a thorough examination of a behavior, Tinbergen2 suggested that each behavior should be explained according to:
None-the-less, ethology also had its own dogmas -  for example, that animal behavior is composed of "fixed action patterns" that are expressed when genetically-defined "sign stimuli" act on an "innate releasing mechanism".

What physiological mechanisms underlie the fixed-action-pattern concepts? In his early writings, Lorenz attempted to explain behavior by analogy with a hydraulic model which is engagingly depicted in the animated gif borrowed from flyfishingdevon.co.uk.  Tinbergen used an electrical circuit model.

Neither analogy was readily transferable to flesh and blood.

The scientific approach to the songs of birds emerged at the same time as the birth of ethology, but "birdsong science" avoided tortured mechanistic analogies. Instead, research on birdsong focused on physiological linkages between behavior observations in the wild and experimental neuroscience in the laboratory.

Songs of nightingales, canaries, and other birds had delighted esthetes and challenged scientists since the Renaissance.

Birdsong research became tractable due largely to the use of the sound spectrograph, a device  invented in World War II for underwater eavesdropping on enemy submarines. In pioneering laboratory and field investigations, William Thorpe, Peter Marler and many others (see Nature's Music3) recorded and dissected the songs of birds and meticulously cataloged the species-specific differences.

Birders (and birds themselves) can readily identify each bird species by its unique song. Does this prove that bird songs are innate?


What happens when young songbirds start to sing? They copy the songs of their fathers:
As Peter Marler put it:


"when we adopt a developmental approach, which is what Tinbergen was advocating, the instinctive/learned distinction loses its logical underpinnings."2

Since the mid-20th century, there has been a torrent of scientific papers on the progressive changes as young birds acquire adult song and on the roles of the various brain centers that preside over singing.

Birdsong vocal learning is now an attractive general model for research on the cellular basis of motor learning. One example of motor learning is a high school athlete becoming proficient at pitching a curve ball. The rough draft of the "throwing" behavior is already present in our brain and is perhaps innate.  But training and practice profoundly refines that rough draft.

The brain centers and nerve networks

In the last few decades, laboratory scientists have identified the brain centers and networks responsible for birdsong and vocal learning. 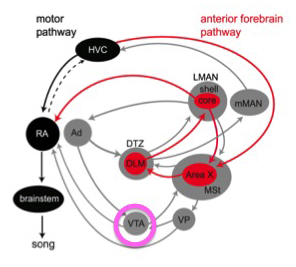 The neurocircuit diagram (right), adapted from one published by Michael Brainard's lab at the University of California-San Francisco, offers a reconstructed layout of birdsong pathways5 in the brain. The centers are:
Now in the 21st century, research of many labs is directed toward exposing the physiological and molecular bases for song variability and individual specificity. Birdsong has become an important biomedical model for probing the cellular bases of learning. We will discuss the centers in more detial in future Blogposts.

As birdsong science took off, the underlying neuroscience of bird brains experienced a revival due to results from molecular embryology. The neuro-geographical map of bird brains was re-interpreted and revolutionized in the last decade (Reiner et al., 20046 and Jarvis et al., 20057  and discussed in our earlier Blogpost).

Walking, flight, and birdsong improve with practice, as does the acquisition of dance skills by young Sandhill Cranes (known as colts). Very young crane colts display to each other and interact with their parents, starting in the first few days after hatching.  Over the ensuing weeks, the parents "encourage" the colts to dance, as shown in the image below when the colt was 21 days old. 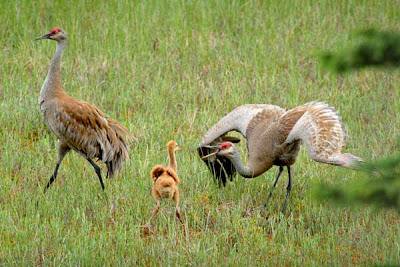 In the weeks following, the  colt flail-dances with the father parent at 35 days of age (below left below) and dances smoothly with parents by 40 days later (below right). 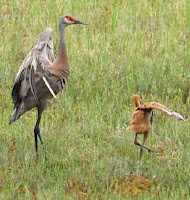 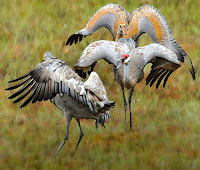 Sandhill crane displays are complex. Some of the dance lexicon is depicted in print1 and on the web and progressive acquisition of dance skills is generally summarized on a related page. 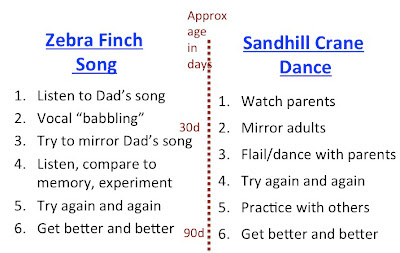 For finches, the neuroscience/brain center correlates of the behavior are under intensive study in several major research laboratories. There is yet no data on the brain centers that preside over dance in cranes.  However, the acquisition of crane dance behavior is strongly suggestive of motor learning and that is underlain by brain circuits like those for birdsong.

Crane dances are refined over many years. Dance performance probably improves over the 2-3 years while young cranes dance in crowds to assess potential mates. Furthermore, we have a photographic chronicle that demonstrates marked shifts in the selection of postures and the execution of displays for the dances between the male and the female of a pair that we have watched on their nest territory for over a decade.

Dance reflects motor learning as the bird refines and develops genetically based capabilities. For dancing of cranes as for vocal learning of songbirds, motor learning optimizes better communication among members of a species.

Birdsong and vocal learning are generally thought to have evolved independently in three avian lineages: oscines (higher passerines), hummingbirds, and parrots. In an important study, Erich Jarvis' lab at Duke University and his German colleagues have shown that brain centers for birdsong are akin to brain motor centers, like those concerned with walking and flying.8 In zebra finches, the "white rat" for birdsong, dance choreography seems to be transmitted from tutor father to pupil son.9 We believe that the ontogeny of dance in cranes reflects motor learning in a fourth avian lineage.

Finches progressively refine and improve their songs by comparing with a memory of their tutor's song which they heard during a sensitive period in their young lives. Whether cranes use memories of their parents or the responses of dance partners (or both) remains to be investigated.  It may be that crane motor learning is lifelong, unlike songbird vocal learning where sensitivity to the tutor is restricted to a particular period in a young bird's life.