The earliest vertebrates on the earth were fish. When their descendants first ventured into land environments, they had to return to the sea to lay their eggs.

About 300 million years ago, one vertebrate lineage made a major evolutionary breakthrough by evolving a special sac, called an "amnion", that protects an embryo from dessication when the egg is laid away from water. 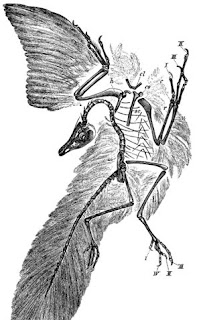 Most modern mammals have remained quadrupeds that use all four appendages for walking. Many dinosaurs became bipedal, with pedestrian bodies balanced on the rear legs so that front legs that could be used for catching and manipulating food.1

In some bird-like dinosaurs, front legs evolved into wings. Manipulative skills were largely relegated to the beak at the end of an elongate flexible neck, seen to the right in a primitive Archaeopteryx from the Late Jurassic, 147 million years ago.2

Flight required precise motor coordination and wide-angle surveillance to process a snowstorm of visual input and thus to avoid collisions. Many of the transitional innovations for flight aren't well preserved in fossil bones, but the shape of the brain can be deduced by the shape of a skull. The progress toward a modern avian brain is already evident in the Archaeopteryx brain which has been beautifully reconstructed after CT scanning of an ancient fossilized skull.3

The brain of Archaeopteryx  (to the right) is about three times bigger than that of a comparable modern lizard but still much smaller than the brain of a modern bird. The enlarged optic lobes (ol), olfactory tract (ot), and well-developed inner ear likely reflect the importance of vision, olfaction, and hearing. The expanded cerebellum (cb) and cerebrum (c) suggest improved fine control of movement and increased cognitive sophistication in this primitive bird-like dinosaur.

A large asteroid struck at the K-T (Cretaceous-Tertiary) boundary, disrupting the earth's ecology and decimating most groups of dinosaurs.  Birds and mammals came through the chaos, Their better brains were among the most critical adaptations that permitted survival4 in the 65 million years since.

As the body plans of birds and mammals adapted to contrasting lifestyles, their brain anatomies diverged.  All vertebrate brains begin in the embryo as a chain of hollow bulbs, the forebrain, midbrain, and hindbrain, at the front of the nerve tube. The upper part of the embryonic forebrain is called the pallium (named for the woollen cloak that Popes confer on Archbishops) and the lower part, the basal ganglia. In the course of embryonic development, nerve cells in the pallium and basal ganglia multiply and mix together according to an elegant program that establishes the adult brain anatomy.

The embryonic pallium becomes the cerebral cortex, a complex living plywood that often wrinkles and folks as it laps over the basal ganglia in adult mammals. To support teeth and chewing muscles, mammals evolved a massive bony skull that is also serves as an armored brain vault.

Bird lifestyles preclude a massive skull. A heavy head, pendulous and swaying at the tip of an elongate neck, would be an aeronautical liability, so natural selection kept birds' heads small and bird brains compact.  Nonetheless, birds got brighter as their forebrains reorganized over hundreds of millions of years of evolution.

Bird brain architecture is broadly reminiscent of modern minimalist "tiny houses".  Bird brains are space-efficient. Pallial neurons within an avian brain are clumped in nodules, called nuclei. Like scores of tightly-packed garlic cloves, the nuclei are squeezed together and linked to one another via nerve processes.   One researcher reported that a bird brain has twice as many cells per unit volume as a mammal brain.

The compact bird brain is protected by a thin but amazingly resilient skull. If we think of the mammal skull as like a cast-iron helmet, then a bird skull is like a Kevlar helmet. [See the footnote below for more on the amazing skulls of birds.]

As scientific knowledge accumulates and is passed down, concepts and terminology constrain our understanding of the natural world. Brain terminology and nomenclature were hampered by many historical accidents.

Mostly working from animal dissections, Erasistratus of Alexandria (304 BC – 250 BC) described and named the cerebrum and cerebellum. Renaissance physicians like Vesalius broke open the skulls of human felons after their executions, found similar structures, and pondered the role of each brain component.

Nineteenth and early 20th century comparative neuranatomists were guided by their classical concept of Darwinian evolution - "up" from amphibians to reptiles to mammals to man. Ludwig Edinger, the father of comparative neuroanatomy5 and many others who followed6, viewed brain evolution as a process akin to the deposition of layers in sedimentary rocks. New centers were wrapped around older ones: first the mesencephalon at the bottom, next the diencephalon, then basal ganglia were layers over the diencephalon, and finally, the pallium on the upper surface.

According to the "ladder of life" evolutionary perspective, man is at the top of the ladder. The apex for brain evolution is the mammalian six-layered neocortex, best elaborated in humans. Higher mental processes are attributed to the cortical cerebral hemispheres while instinct, reflexes and vegetative functions are assigned to the underlying basal ganglia.

Since the bird brain has no wrinkled cerebral cortex, Edinger and his contemporaries reasoned that the majority of a bird's forebrain is basal ganglia. Since they saw bird brains as those with a puny pallium, they concluded that a bird's brain must be largely restricted to simple responses.

The Edinger view of bird brain anatomy remained fashionable among biologists until almost the end of the 20th century. At the same time, It was consistent with behaviorist psychology dogma, then dominant in psychological and ethological circles across North America. Birds were regarded as creatures of reflexes, instincts, and fixed action patterns.

One gifted neuroanatomist, Harvey Karten, was prescient.  His incisive yet understated landmark paper, published in 1969, noted that comparisons between bird and mammal brains "were often tenuous" . He concluded that "at the present time, we are still ignorant of the nature of the greatest number of neuronal elements in the avian forebrain" 7.  In circumspect language carefully buttressed by his original data, Karten argued that the avian pallium is respectably large, but differently organized than the mammalian cortex.

The molecular biology explosion over the last fifty years has enriched not only our understanding of genetics but also of physiology and embryology.  Markers of gene expression allow mapping of gene activity in time and space and thus permit precise definition of the phenotypes of individual cells or groups of cells.  One can find the sites where chemical signals are made, where they are stored, where they are released, where each kind of receptor is located, and how these patterns change with alternations in physiological state. One can reconstruct regulatory circuits.

Gene expression data allows neuroscientists to see where and when particular cell populations arise and then allow them to be tracked through development. Thus one has objective criteria to reliably identify homologs of brain components across species, orders, and classes. Recent systematic studies of gene expression in bird embryos revealed that Karten was quite right8,9.  "The adult avian pallium comprises about 75% of the telecephalon"8 (forebrain) in both birds and mammals.
Names matter. In science as in politics, names color logic and bias conclusions.  The traditional venerated bird brain nomenclature, based on centuries of gross dissections and meticulous studies of pickled tissue slices, was recognized as archaic, outdated, and misleading. The very terms used to describe bird brains reinforced outmoded concepts.

A prestigious Avian Brain Nomenclature Group assembled at Duke University in 2002 to revise bird brain terminology. The cartoons below, drawn by Zina Deretsky for the National Science Foundation10, summarize the conclusions. Notice particularly, at the top left, the small green cap of pallium as depicted according to outdated neuroanatomy, in contrast to the much larger green areas of bird pallium in modern view (bottom left). 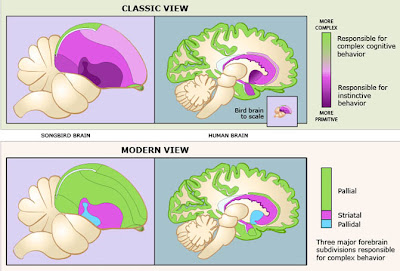 The new anatomical nomenclature is congruent with the cognitive revolution in psychology that began at mid-20th century in Europe and is now in full-bloom across the globe.  The 21st century nomenclature facilitates understanding of How birds think.  It helps open new perspectives for understanding animal minds.

Brains are ancient on this earth. In the embryo, virtually identical genes specify the major divisions of the brain in bees, in birds, and in human babies. Neurotransmitters, receptors, brain mechanisms, and developmental decisions reflect very deep homologies that reach back to genes and brains of ancestors from half a billion years ago11.

Evolution offers perspective at many levels. Avian neuroscience and mammalian neuroscience overlap widely and deeply. Commonalities in genes, in nerve cell circuits, in division of labor across anatomical brain units, and in behavioral outputs, are legion.

Natural selection has produced an elegant design for bird brains and these brains do wondrous mental feats. Later blogposts will review recent research on bird brains and behavior and will attempt to provide some tentative insights into bird minds.

Footnote: How do birds minimize concussions when they impact windows?

All brains are fragile. But the weight constraints for an efficient flight machine preclude a massive protective skull. Yet, as we all know, birds frequently collide with windows and fall to the ground.  Some die, but quite often the stunned bird recovers in a few minutes.

Why is there relatively little damage?

Two explanations are common:
First, birds are protected by their "pillow" of head feathers that softens impacts.
Second, although bird skulls are light and thin, the bone is exceptionally dense and tough12. To use a broad analogy, bird skulls are like Kevlar while mammal skulls are like "Old Ironsides". Even when birds are killed by collisions with windows, actual fractures of skull bones are rare13 .

Two additional explanations deserve further consideration.
Third, since the skull bones are "pneumatized" with internal air pockets14, the skull might function like a helmet of bubble-wrap or styrofoam.  In a fascinating older paper that often goes unnoticed, JG and DL Harrison further suggested that air sacs also function like "an inflatable air-suit" that buffers the brain from surges in blood pressure and thus prevents blacking out when birds dive sharply.15
Fourth, avian neuro-architecture might inherently confer shock resistance. The globular centers packed together in the bird pallium might be less prone to ripping and tearing than the six-layered mammal pallium.

Further research might elucidate the exquisite physiological adaptations of the bird body plan and also (we hope) might facilitate the invention of more humane protocols for poultry slaughter16.