What Birds belong in the "Clever Club"?

Nathan Emery's delightful and thoughtful book, Bird Brain An exploration of avian intelligence, should be read by all serious students of bird behavior.

Bird Brain brings together diverse research threads and makes them coherent. The book is notable for its economy of language, judicious selection of materials, and meticulous original illustrations that are tightly linked to the with the text.  It builds from Emery's previous suggestion that that crows, jays, and parrots should be thought of as Feathered Apes and should qualify as "members of the Clever Club."

For much of the 20th century, bird brains were undervalued. The prevailing scientific view of a bird's brain was superficial, wrong-headed, and based on faulty anatomy buttressed by an abiding unconscious preoccupation with a "tree of life" that leads upwards from microbes to man - thus reaffirming human exceptionalism.

Brains are the most complex and baffling of all organs, in birds and in humans. Since the first medieval human cadavers were exhumed for dissection, brain anatomists have been devising ponderous formal anatomical terminologies that came to be not only opaque but also misleading to non-specialists.

Only mammals have a well-developed 6-layered cerebral cortex and so that cortex came to be regarded as the hallmark of a top-quality brain.  Classical neuroanatomists reasoned that because birds lack such a cortex, then bird brains must be primitive feeble organs, capable of only simple automatic "instinctive" responses to stimuli.

Research in anatomy, molecular evolution, and behavior converged to refute those misconceptions of bird brains. The pivotal research was that of Harvey J Karten who traced the pathways from the ear to the higher audition centers of a pigeon's brain2 in the mid-20th century. Clumsy anatomical terminology was finally revolutionized in the early 21st century3,4,5. 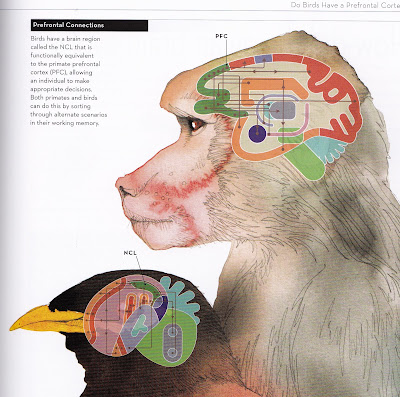 High level mental capacities in birds may be localized in quite different anatomical locations than in mammals. Like mammals, bird brains have an executive center that organizes behavior over time.
Emery's drawing on the right depicts the executive centers (dark green) of a primate and of a crow as recently investigated by Onur Güntürkün at the University of Rhom6,. The bird's executive center, the dark green NCL (nidopallium caudolaterale), is at the top rear in the crow's forebrain while the primate executive center, the  dark green PFC  (prefrontal cortex), lies behind the forehead above the eyes at the front of the forebrain.

The succeeding six chapters are the meat of the book.  Nathan Emery masterfully brings together research concerned with learning, memory, navigation, communication, self-awareness and tool using, to confirm the impressive cognitive capacities of birds.  These beautifully written and illustrated chapters critically showcase ongoing research of Emery himself (at the University of London), that of his wife Nicky Clayton (at the University of Cambridge), and incisive experiments of many other gifted biologists.

Nathan Emery made judicious choices as he picked his topics and examples, largely drawn from research on crows, parrots, jays, pigeons, and zebra finches.  However, the story that Emery tells is perforce incomplete because we have so much to learn about bird minds, bird cognition, and bird emotion, even in the few species where they have been studied.

Birds comprise over 10,000 species in a lineage that has evolved for 300 million years in parallel to the lineage that gave rise to us mammals. The exquisite adaptations of birds for diverse life styles call for further research, and bird brains are excellent models for many universal mechanisms of brain function.

We should all look again at the behaviors of the birds in our lives, to better understand birds and ourselves.